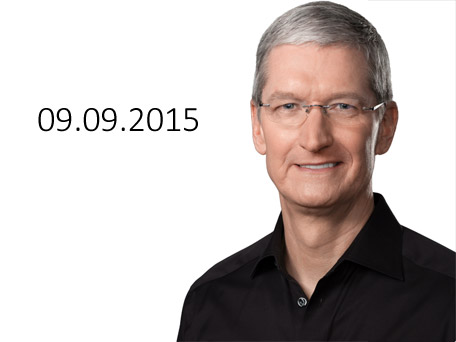 Apple has set Wednesday September 9th for its next event, widely expected to be one of the largest ever. The buzz is that Apple is expected to reveal several new products, with the iPhone 6s and the iPhone 6s Plus as the star attractions

There are not expected to be any major differences in the actual appearance of the two iPhone models, if “s” upgrades of the past are followed then the overall design should remain, although some reports suggest that the new phones may be very slightly thicker. The iPhone 6s and the iPhone 6s Plus will made from an improved alloy called 7000 series aluminum, as used for the Apple Watch Sport, the Apple website states “For Apple Watch, we created a new alloy of 7000 Series aluminum that’s 60 percent stronger than standard alloys. Yet it’s very light. Together with the Ion-X glass covering the display, it makes the Sport collection watches up to 30 percent lighter than our stainless steel models. It’s also exceptionally pure, with a beautifully consistent appearance that’s difficult to achieve with traditional aluminum alloys.” A new color option available for both new phones, which should prove popular, is called Rose Gold. Previous colour options available for the iPhone 6 and iPhone 6 Plus of gold, white/silver and space gray are to remain available as options for the latest versions. The new devices will both feature 12 megapixel cameras that are capable of filming 4K video, they will also feature the new A9 processor from Apple, with 2GB of RAM and faster LTE speeds. The iPhone 6s and iPhone 6s Plus are expected to incorporate the same Force Touch technology as used in the Apple Watch, this is what the Apple website says “In addition to recognizing touch, Apple Watch senses force, adding a new dimension to the user interface. Force Touch uses tiny electrodes around the flexible Retina display to distinguish between a light tap and a deep press, and trigger instant access to a range of contextually specific controls. With Force Touch, pressing firmly on the screen brings up additional controls in apps like Messages, Music, and Calendar. It also lets you select different watch faces, pause or end a workout, search an address in Maps, and more. Force Touch is the most significant new sensing capability since Multi Touch.” Some are saying that this technology may be given a different name for the new devices

The iPad Air 3 and the iPad Mini 4

Most reports suggest that the iPad Mini 4 will be the device that will change the most; rumors say that it will be both lighter and thinner, many feel that it is expected to look very much like the iPad Air. The iPad Air 3 will probably have a newer and faster processor, either an A9 or A9X, and possibly even benefit from an increase in RAM to 3GB

Apple TV
A new Apple TV set top box is expected, this version will be noticeably thicker than its predecessor and will feature an A8 processor, redesigned remote control and include Siri for voice control

The September 2015 event at the Bill Graham Civic Auditorium in San Francisco should be a very exciting time for Apple fans, we will be back with an update so be sure to watch this space