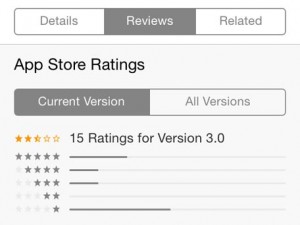 Apple has started a crack down on false reviews in the App Store, recent reports say that the removal of any fake reviews commenced sometime around the beginning of 2014.

The problem of false reviews in the App Store has been an ongoing and widespread issue, an issue that can have an impact upon App store rankings and Top Charts. Certain individuals, including App developers, are so often tempted by the activities of those unscrupulous marketing services and websites who sell false five star reviews. Some App developers even post jobs on freelancer websites advertising for reviews, it is bad news that this has now become common practice. This type of market is unfortunately a common one and the process in which someone buys these fake reviews to improve downloads of their product and increase their rankings is defined as “gaming the system”. Apple often warns App developers about this kind of activity and has even said that anyone found to be using this kind of manipulation of App Store rankings would face a ban from their developer program.

Although many people have been taken in by a fake review and have made a purchase of an App based on that particular review, it seems that the fake reviews are actually quite easy to spot. Firstly a prospective purchaser should hear alarm bells if an App that has just been released is already showing a large amount of five star reviews, it is extremely unlikely that any App – even the top Apps, will have gained 100 per cent five star reviews. False reviews will often have the same format, the structure of the review will be very similar and so will the wording, grammar and punctuation. Fake reviews will often seem that they have all been written by the same person, or by someone following a basic format and just changing the title, etc.

It is not clear just how long Apple has been targeting these review scammers but it seems that some App developers have seen thousands of their reviews suddenly disappear, of course any developers who have been guilty of organising fake reviews for their product are not likely to complain. Good news then for the honest and ethical App developers out there, although fake reviews may often be easy to spot they are still bound to affect ratings and the download market, so well done to Apple for trying to weed out the unscrupulous and level the playing field.